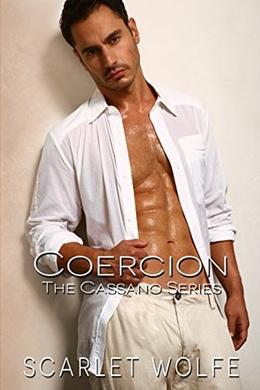 In Coercion, the third book of The Cassano Series, all truths regarding the Cassano family are revealed to Victoria. She must decide where her loyalty lies, and Adrian must make decisions of his own once he’s confronted with her ultimatum.

Simon and Sadie’s relationship deepens, but he has yet to reveal to her the depth of his troubles at Hotel Submission. He’s stalling, anxiously anticipating having to give her the upsetting news.

Noah Sanders becomes a larger threat to the Cassano brothers, but he is also their only chance at keeping their freedom. Plans are put into place to take him down, and the clock is ticking on the time the family has left to make it happen.

A woman catches Zev’s eye, and she’s tougher than he thinks. Will she be the one to stop his womanizing? Could she be the savior to all of their problems?

Coercion is packed full of steamy moments and anticipation, leaving you hungry for the fourth book, Conviction.
more
Amazon Other stores
Bookmark  Rate:

'Coercion' is tagged as:

The 'The Cassano Series' series

Buy 'Coercion' from the following stores: