Into the Highlander's World 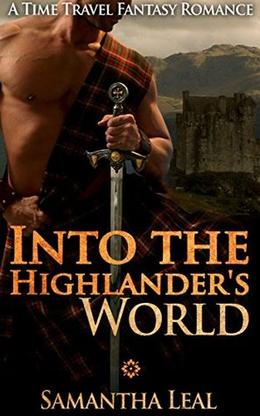 Gwen has hit bottom. She is beyond “down on her luck” after splitting from her boyfriend (who, of course was a cheating bastard) and thinks things can't possibly get any worse when, broke and bereft, she is forced to move into a crumbling basement apartment. She had given up everything to make things with her boyfriend work and he only threw it all back in her face. Now, out in the world alone and on her first night in her new place she comes across something that will change her life forever. There, beneath the floorboards she finds what at first just looks like some junk left behind by the last sloppy tenants. But soon she will find it is hardly junk. The ancient sword she has found will lead her into an unimaginable adventure, turning her life more upside down than she could have ever imagined.
By some miraculous means far beyond her comprehension, she is transported back to ancient Scotland, where she meets the handsome Andrew Urquhart, a man determined to win back his people's lands and lead his clan to the victory they have so long deserved. What Gwen doesn't know is that her life has far more reach and significance in this long ago past than she would have ever thought possible. She is actually an integral part of his plan. But now that she is there, an in the face of the intense passions that have built between her and this almost mythical man, will she ever be able to return to her old world? Or is this strange place actually where she was always meant to be ?
Warning: This ebook contains mature themes and language and is meant for 18+ readers only.
more
Amazon Other stores
Bookmark  Rate:

'Into the Highlander's World' is tagged as:

Similar books to 'Into the Highlander's World'

Buy 'Into the Highlander's World' from the following stores: