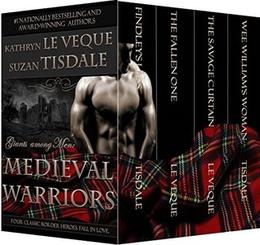 The bigger they are ...the harder they fall.

Two of the biggest names in Medieval Romance combine for a fabulous Medieval Romance collection of Border Giants... Medieval warriors, both Scots and English, who are larger than life, giants among men, and deeply devoted to the women who love them.

FINDLEY'S LASS - She had won his heart without trying… and he can only hope for a chance to win hers.

THE FALLEN ONE - He was disgraced in battle. Can she help redeem a knight who has lost everything?

THE SAVAGE CURTAIN - The conqueror marries his captive and an unexpected love blooms. She must fight for him when her people threaten his life.

WEE WILLIAM'S WOMAN - The giant Highlander is a self-proclaimed bachelor who has sworn for years that there isn't a woman in all of Scotland worth shaving his beard for ... until he meets her.

'Giants Among Men: MEDIEVAL WARRIORS' is tagged as:

Buy 'Giants Among Men: MEDIEVAL WARRIORS' from the following stores: