Made to Measure Man 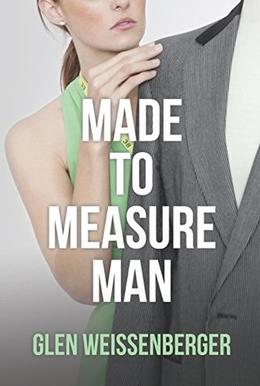 What happens when charming law school dean, Garth Matthews' predictable life is completely upended by his surprise receipt of a multimillion dollar award for his leadership?

While Garth is intrigued by the hilarious, crotchety octogenarian matriarch of the Schmidhausen Foundation that created the award, Agnes, he is immediately romantically captivated by Agnes’ granddaughter, Julia, whose beauty and brilliance are accompanied by an enchanting mysterious quality.

Romantic suspense and entertaining humor characterize the ten days of Garth’s life captured in Made to Measure Man in his adventures to find out more about this upcoming achievement award from the bestowing Zürich foundation, and more about the elusive Julia.

Is the Schmidhausen Foundation involved in nefarious activities? What if the lovely, elegant Julia is not who she appears to be?

And despite Garth’s being a man who is usually in control of his surrounding environment, what happens when he is drawn into the suspenseful world of art theft when he is actually considered a suspect?

Outrageously humorous episodes of law school academic politics interweave with the intrigue of Nazi stolen art, and Garth travels from his home in Chicago to New York City to unravel these mysteries.

While there, Garth enjoys his favorite haunts, providing an insider’s peek into New York City’s most sophisticated and luxurious hotels, restaurants, and cultural sites. And in a moment of relief from his sleuthing, Garth enjoys a shopping excursion to find the first, perfect gift for Julia, but does she deserve this?

Garth’s suspenseful escapades are all recounted with his gentle humor, and are set against the tenderness of an unfolding love story, that may or may not prove to be what he has always longed for.
more
Amazon Other stores
Bookmark  Rate:

'Made to Measure Man' is tagged as:

Similar books to 'Made to Measure Man'

Buy 'Made to Measure Man' from the following stores: