Atonement (Chronicles of the Fallen #3) 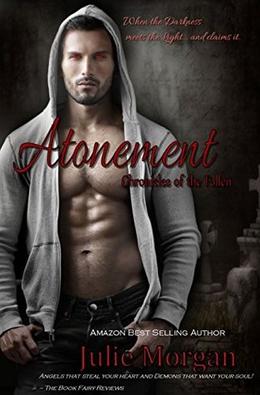 When the Darkness meets the Light... and claims it.

He's caused havoc. He's brought Hell to earth. He's taken more souls than he cares to remember. When Samuel comes face to face with a woman he has
centuries of history with, she makes him work harder than he's ever worked on claiming a soul.

Anauel has been charged to end Samuel, once and for all. She hates who he's become, she cannot stand his existence and she plans to do whatever it takes to bring him down. What she doesn't count on is his
seduction making its way into her heart.

Anauel plans to destroy him for everything he has
become. But a big ‘what if’ lingers over her: Can she send him down the path of atonement, or will Samuel lure her over in hopes of claiming her soul?

Fighting lust and temptation, Anauel will need to fight harder than she's ever fought before; for her soul to live. In claiming the soul of an angel, Samuel will find himself also fighting against something he's completely unfamiliar with; the ability to feel something greater than lust and seduction... love.
more
Amazon Other stores
Bookmark  Rate:

'Atonement' is tagged as:

The 'Chronicles of the Fallen' series

Buy 'Atonement' from the following stores: