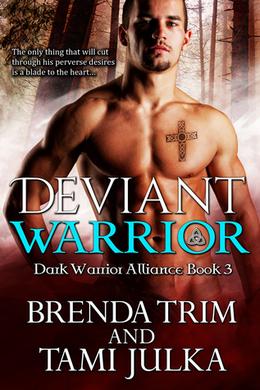 Of all the Dark Warriors, Kyran Tarakesh is the most aberrant. Having witnessed the brutal murder and rape of his mother seven centuries ago, his sexual preferences are twisted and perverse. He walks the razors edge of control and he likes it that way, until he loses that balance and accidentally kills one of his lovers. As second in line to the Vampire throne, he is precariously close to losing his position, not to mention the respect of his brother and fellow warriors. Just when he thinks it can’t get any worse, the Goddess proves him wrong. With her wicked sense of humor, the Goddess catapults him to the dragon realm of Khoth with Mackendra Callaghan, the very human he has been lusting about for months since meeting her. Mackendra not only plunges a knife deep into his heart, she flees and fights him at every turn, inflaming his desires. The surprises keep coming when he discovers she is his Fated Mate. Every belief he has ever had about intimacy is called into question when his mate gives him a taste of true pleasure for the first time. The passion that burns between them is hot enough to burn them to cinders, but he still must dispel her prejudices about vampires and break through her barriers or lose the other half of his soul forever.
more
Amazon Other stores
Bookmark  Rate:

'Deviant Warrior' is tagged as: