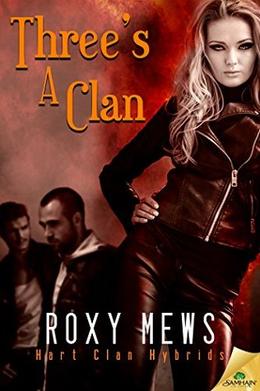 Sometimes the only way to hold on is to let it all go.

Finding out she’s a byproduct of her maker’s plan for world domination is a letdown for Shelly Meyers. Now she must figure out where to pin her loyalties. Tradition tells her to follow her leader, but something tells her tradition is overrated. Is it her conscience? Nah. Not that. Not anymore.

Richard Paulson never planned on turning furry, yet here he is, an Alpha in charge of a pack. Even with Doc, his beta, at his back, he seems to keep winding up in another frying pan.

Long ago, Trevor “Doc” Paulson gave the woman he loved to someone who could give her the life she deserved. Now, as he and Richard fight to prevent history repeating, he’s struggling not to act on pure attraction—again. He knows he should be Rick’s voice of reason, but what happens when the three of them get close makes no sense at all.

Together they must decide to let go of the past to forge a new future—and fast. Before a power-hungry vampire takes it all away.

Warning: This book contains a sexually volatile vampire who is about to grab the world and a couple of werewolves by the balls. Not for the faint of heart, or those who are opposed to sex, blood, bites, multiple partners and multiple orgasms.

'Three's a Clan' is tagged as:

Similar books to 'Three's a Clan'

All books by Roxy Mews  ❯

Buy 'Three's a Clan' from the following stores: