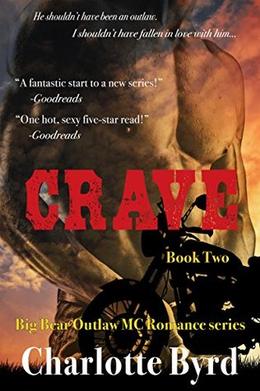 He shouldn’t have been an outlaw, I shouldn’t have fallen for him…
EMMA
Jack Hart was all wrong for me. He was in the Big Bear Outlaw Motorcycle Club. I was studying pre-med. He was a criminal, and I’ve never even jaywalked.

After my mom had left, the last thing I wanted was a relationship.But then I started falling for Jack. Why did he have to have a girlfriend? Why did I have to go out with his brother?

JACK
My family ran the MC, but there was so much more to me than the MC. I was a writer and I didn’t belong. The only person who saw this was Emma.

Why did I have to have a girlfriend? Why did she have to go out with my brother?

Crave is the second installment of a 3-part Big Bear Outlaw MC Romance series. It is a short read. All three installments will come out a week apart. You won’t have to wait long to read the rest of the story!
more
Amazon Other stores
Bookmark  Rate:

All books by Charlotte Byrd  ❯