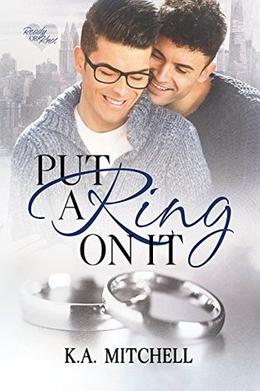 Ready or Knot: Book One

Kieran Delaney-Schwartz—adoptee, underachiever, and self-professed-slacker IT guy—lives his under-the-radar life by the motto: Don’t try, don’t fail. His adopted siblings are all overachievers thanks to his driven, liberal parents, but Kieran has elected to avoid disappointing anyone by not getting their hopes up. He’s coasting through his early twenties when he’s hit head-on by Theo. The successful decade-older Broadway producer sweeps him off his feet for a whirlwind thirteen months that are pretty sweet, until it all comes screeching to a halt on Valentine’s Day, with an unexpected proposal via an NYC Times Square flash mob.

Now everyone wants in on the wedding, except the grooms….
more
Amazon Other stores
Bookmark  Rate:

The 'Ready or Knot' series

Similar books to 'Put a Ring on It'

All books by K.A. Mitchell  ❯

Buy 'Put a Ring on It' from the following stores: