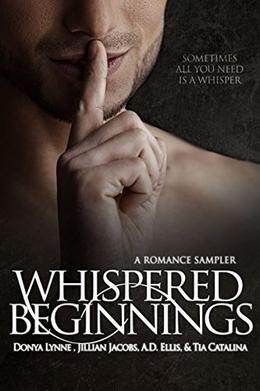 A whisper sends shivers down your spine. It’s a tantalizing promise of something more.
This collection will tease your senses and leave you longing for each story’s blissful end.

Whispers of traditional romance include:

Good Karma
What starts as a casual flirtation between commitment-phobic Mark Strong and impressionable Karma Mason takes a series of surprising turns as they embark on a sensual journey destined by fate. Mark is driven to know Karma, understand her…educate her, and she is his willing student, eager for the pleasure he promises. But when the student becomes the teacher, Mark has to make a choice between taking another chance on love or a future alone.

Ember’s Center
Determined to escape her traumatic past, Ember Brooks is finally headed for solid ground, gathering strength and balance with the help of her trusted counselor and friend, Xander Kane. But her game plan is altered when pro-football player, Owen Killion barrels into her life and changes the game. When Ember is the victim of increasingly dangerous incidents, and Xander changes the course of their relationship, once more her life hits the red zone.
Ember trusts Owen to guard their burgeoning love, but when someone else is calling the shots, can they reach the end zone or will they fumble?

Decker
When Decker Morgan returns to Torey Hope, he has no time for love and distractions. Kate Turner had planned to leave Torey Hope after college, but she found being there for her family took precedence. When Decker hires Kate she turns his world upside down. Decker has to decide if he’ll give in to a forbidden romance or keep his tight control firmly in hand. Kate is possibly his perfect girl, but unexpected chaos and havoc at work threaten to tear her away.

Blue Falcon
Marine, Grace Garcia, is haunted by her actions in combat that took the life of a child. When a series of events places her under the protection of Special Agent Jared Cooper, she must face her past head on. Jared’s young daughter initially terrifies Grace, but the child’s sweet nature and unwavering love renews Grace’s will to live. When a dangerous enemy threatens to destroy her and the people who have accepted and nurtured her, Grace must embrace her warrior past to stop the elusive Blue Falcon from killing them.


Whispers of male/male romance include:

Winter’s Fire
Persecuted by his father and uncertain about his future, ex-Army sniper Sam Winter turns to his best friend Cooper Brown, who he’s secretly been attracted to since high school. He never imagined Coop felt the same way about him, so when Coop reveals he’s been in love with Sam since before he left for the Army, their friendship expands in ways neither thought possible. But when an infernal stable fire threatens the family horse farm and Sam’s life, shocking truths will be forced into the light, and he’ll need Coop more than ever.

Sawyer
Sawyer Morgan has a secret. Revealing his true feelings to his family could bring devastation and destruction, so he keeps the burden firmly on his own shoulders. Luke Hamilton has a past overflowing with emotional and physical scars. A promise to his dying mother prevents him from seeking the love and acceptance he longs for. Secrets, lies, hatred, and fear threaten to destroy their lives.
more
Amazon Other stores
Bookmark  Rate:

'Whispered Beginnings: A Romance Sampler' is tagged as:

All books by Donya Lynne  ❯

Buy 'Whispered Beginnings: A Romance Sampler' from the following stores: