The Regent's Rapture (Lords of Zanthar #4) 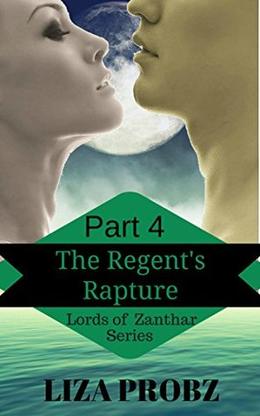 Part IV of this serial series. The next part will come out shortly, but don’t miss the release! Join my newsletter and I’ll shoot you a quick e-mail the day we release the next part. http://eepurl.com/bs7Qb1

Dr. Sylvia Cohen, MIT's premiere astrobiologist has been chosen for a follow-up mission to Zanthar, a planet showing the promise of Life. Leaving little behind on earth, she sustains a crash landing on the large seaweed planet and encounters far more than the micro-organisms discovered years earlier.

The Supreme Regent of Zanthar has a natural affinity for human females and finds himself quite taken with the lovely doctor, but war stands at their door. His determination of her innocence or guilt will change the future for both of them. He will test her in many ways, finding himself wanting her to succeed more and more each time.

Sylvia determines that science can explain most anything, but matters of the heart are forever a mystery.

*** Please be aware that this is a romance serial story. There are six parts total and when put together, they create a full-sized novel. The entire story will be FREE with Kindle Unlimited, or you can have the full serial series in the bundle that I’ll put out as soon as the last serial releases. ***

'The Regent's Rapture' is tagged as:

The 'Lords of Zanthar' series

Similar books to 'The Regent's Rapture'

All books by Liza Probz  ❯

Buy 'The Regent's Rapture' from the following stores: