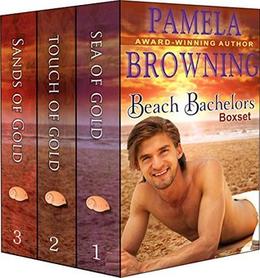 SEA OF GOLD: When marine historian Alix Pendenning produces evidence of a centuries-old, unexplored Spanish shipwreck off St. Augustine, Florida, charismatic treasure hunter Ponce Cabrera hires her as his expedition photographer. But as the pair race to find the sunken galleon, Alix's secret past threatens to scuttle the most precious treasure of all.

TOUCH OF GOLD: As soon as Paige Brownell steps off the boat onto her aunts' isolated island in South Georgia, she's convinced charming bachelor, Chad Smith, is no handyman. Though her elderly aunts have accepted Chad as a member of the family, Paige launches her own investigation and discovers a mysterious truth that burns hotter than Chad's kisses.

SANDS OF GOLD: At the grand old Palm Beach mansion, Xanadu, Cara Demorest's job shouldn't include refereeing handsome, raffish surfer Alec Martyn and his playboy brother, Blake. Alec's kisses have already captured Cara's heart, while Blake fights for her loyalty. But to save Xanadu, Cara must choose the brother she finds hardest to forgive.

THE KEEPING SECRETS SERIES, in order
Ever Since Eve
Through Eyes of Love
Sunshine and Shadows
Touch the Stars

ABOUT Pamela Browning
Award-winning author Pamela Browning invites you to visit her website at www.pamelabrowning.com and friend her at Pamela Browning Author on Facebook. She hopes you'll look for her other books.
more
Amazon Other stores
Bookmark  Rate:

All books by Pamela Browning  ❯