The Kingdom of Eternal Sorrow (The Golden Mage #1) 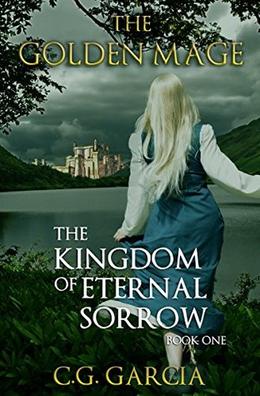 After waking to find her teenaged sister at her apartment in California begging to be allowed to stay after running away from home, Allison McNeal thought her biggest problem that day would be to keep her former stepfather from finding out before she could talk sense into her sister, not the series of strange, unnerving incidents throughout the morning that suddenly have her second-guessing her sanity, and especially not the huge, brilliant light that abruptly flashes in front of them when the two sisters are walking in a nearby park as a hole is seemingly ripped into the very fabric of reality, sucking a terrified and screaming Allison within and ultimately into another world altogether.

Found within the kingdom of Lamia and suddenly manifesting frightening abilities she hasn’t the slightest clue how to control, Allison learns that the locals believe that she’s the Golden Mage, a figure of legend with the ability to perform powerful and terrible spells that haven’t been seen for centuries and destined to fulfill an ancient prophecy where a single decision will ultimately decide the fate of not only two warring kingdoms—one her new home and the other ruled by a cruel mage-king obsessed with Lamia’s conquest—but also a world moving closer to a prophesied time of possible annihilation.

In a world where many see her arrival as a curse and others as a powerful means towards a dark end, Allison’s only guides are a young Mage-general struggling with his own dark past of secrets and betrayals and the Brothers in Divinity, a secretive order of priests and mages whose only loyalties lie with their god and whose divine laws must be followed above all others.

War is swiftly approaching, and if the prophecy is to be believed, only she has the power to determine which kingdom will fall.
more
Amazon Other stores
Bookmark  Rate:

'The Kingdom of Eternal Sorrow' is tagged as:

The 'The Golden Mage' series

Similar books to 'The Kingdom of Eternal Sorrow'

More books like 'The Kingdom of Eternal Sorrow'   ❯

Buy 'The Kingdom of Eternal Sorrow' from the following stores: