Desired By The Sacred Alien 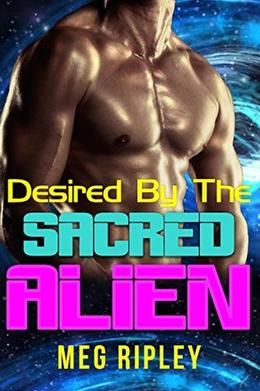 READ For FREE With KINDLE UNLIMITED!

Liora has always been fascinated by extraterrestrials and their link with human society. An Egyptologist, she believes that much of the culture, technology, and architecture she studies about ancient Egypt actually came from sources not of this planet.

Though her colleagues think her ideas are ridiculous, she pursues them steadfastly, especially now that she’s discovered new hieroglyphics that don’t match anything from the keys she knows. One in particular holds her attention and she finds herself thinking about it constantly.

When she discovers a false wall inside a pyramid and is suddenly surrounded by these new, strange symbols, she is teleported from the world she knows via a portal to a spectacular new world that she has always longed for.

Moments later, she finds herself face to face with an impossibly gorgeous alien named Amasis. He soon explains to her that he has in fact been waiting for her arrival and reveals an ancient connection between Earth and his world. Their attraction to one another escalates, but just before they can fully quench their thirst for one another, Liora is accidentally teleported back to Earth.

Can she find her way back to Amasis? Will they overcome thousands of years of strained ties between their species to find each other again?

This book is intended for readers age 18 and over. It contains mature situations and language that may be objectionable to some readers.
more
Amazon Other stores
Bookmark  Rate:

'Desired By The Sacred Alien' is tagged as:

Similar books to 'Desired By The Sacred Alien'

More books like 'Desired By The Sacred Alien'   ❯

Buy 'Desired By The Sacred Alien' from the following stores: