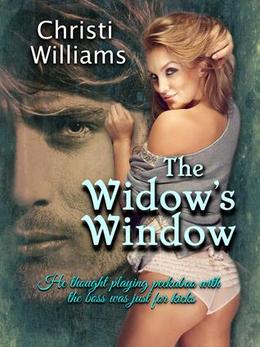 And he thought playing peekaboo with the boss was just for kicks.

Madysen Collins needs help. Her husband has been killed fighting a fire, her all-grown-up daughter has gone off to college, and the details of running a historic ranch are constantly piling up on her. Not used to being anything resembling a lady in distress, Madysen is shocked to discover she's begun looking at handsome Antonio Marquez as more a knight who doesn't need armor to shine than her immigrant ranch hand. As things progress to too hot to handle between them, Madysen worries whether Antonio is capable of handling her secret. Little does she suspect that Tony has deep secrets of his own! Toss in Madysen's recently divorced and remarried brother who shows up wanting to move back to the historic family ranch, the question of whether Madysen's daughter can handle her mom's burgeoning relationship with the hired man, as well as the sudden appearance in Tony's life of a surprise from his past, and the situation at the formerly peaceful Wyoming valley ranch threatens to blow up.
more
Amazon Other stores
Bookmark  Rate:

'The Widow's Window' is tagged as:

Similar books to 'The Widow's Window'

Buy 'The Widow's Window' from the following stores: