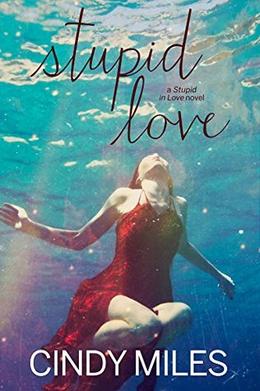 Bestselling new adult author Cindy Miles is set to capture the hearts of STUPID GIRL fans again with the grand finale of the Stupid in Love series, featuring Memory and Jace.

That’s how I refer to the guys who’ve had the bad fortune to fall for me. They only see long legs that they wish were wrapped around them, a cat-like smile, and the reckless abandon to take on any wild dare. It’s all a game to me. Show me a bridge, and I’ll leap over the side. Give me a car, and I’ll race it. Give me a heart, and I’ll break it. I always win. I even showed Death who was boss a long time ago.

Or so I thought.

Now, time is running out, and I’m losing fast…and big. I met someone. Jace Beaumont. He’s smart, and good, and I dream about spending days exploring the summit of his perfect lips. But, I’m a grenade. I know I should leave him be. I can’t.

Study, class, work, repeat. That’s all I have time for. At twenty-five years old, I have a bit more mileage on me than the average college freshman. But, that’s what happens when you spend your youth drinking, partying, and bagging girls like it’s a full-time job. Now, I have goals. There’s just one kink in my plans. Her name is Memory. She’s every guy’s dream girl. She’s intoxicating. She’s trouble. I want to stay away. I can’t.


The Stupid in Love series (can be read as standalones):

Praise for the Stupid in Love series:

"Stupid Girl is the single best new adult novel that I have read to date. Make sure your e-reader is charged, because once you start, you won't be able to stop."
- NYT and USA TODAY bestselling author Lauren Hawkeye

I was on the bottom step, leaning against the porch post when Jace pulled up. My hair was wadded up in a messy ball on top of my head, still damp from my shower. There were those dratted butterflies again, stirring up in my belly. When he swung out of the truck, they kicked up even fiercer.

“I’ve been thinking about something,” I called out.

Jace said nothing; just walked toward me with long, purposeful strides. A dark skully covered his head; he wore his usual faded Carhartt, and jeans that hugged his hips. I watched that bow-legged stride as it carried him straight toward me. Eyes focused, clear, and on mine. A muscle flinched in his jaw as he grew closer. Walked right up to me.

“Did you hear what—”

When Jace pulled back, he rested his forehead against mine, braced his weight against the post, and we were both somewhat winded, and the chilled air turned our warm breath into small puffs of white.

“What,” he said quietly, “were you thinking about, Ms. Thibodeaux?”
more
Amazon Other stores
Bookmark  Rate:

'Stupid Love' is tagged as:

The 'Stupid in Love' series

All books by Cindy Miles  ❯