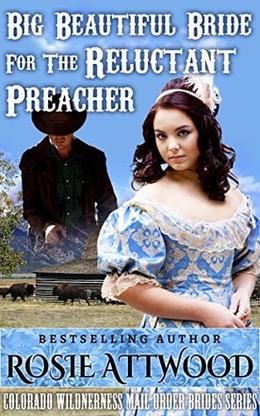 The year is 1878 and for Emily Hernandez, marriage is the last thing she is thinking of. Will she ever get married...

In New York, big beautiful women are not sought after, except by horrible, money-grubbing men like Rodrigo Gonzalez whom Emily suspects is just after the family business.

Then, Emily receives a letter in the post from her friend Katie Carson who has found love in the West. Her friend fills her head with visions of what life could be like as a mail order bride. Emily believes that she's finally found the answer to her prayers and upon arrival, captures the interest of many potential suitors despite her size. However, even though she has so many options, Emily finds herself falling for a man who does not have any interest in marriage”" Ray Benson. He believes the best way to serve God is by remaining single, so Emily resigns herself to being his friend and allowing him to counsel her in whom she should marry, if anyone.

Ray is drawn to Emily, but he wants to keep his mind focused on God and building a church in town. He needs advice, so when a travelling preacher comes to Bradford Junction, he asks seeks the Godly man out. However, the advice that he gives Ray shocks the young man.

Emily struggles with who to marry and Ray wrestles with his vision of the future. When he finally realizes the truth, he may be too late. Can Emily break down the barrier that Ray has put in front of his heart or is it God's plan for her to remain single? Will Ray stubbornly refuse to see what is right in front of his eyes?

A story of clean western romance, friendship, marriage, loyalty, and faith to God.

Each installment is designed to be read in around three hours. They are great when you are waiting for someone, taking the subway to work or just have some extra time to spare anytime, anywhere.

Each short story can be read as a stand alone, even though this is book #1 of the Colorado Wilderness Mail Order Brides Series. It is available for just $0.99 or FREE on Kindle Unlimited.

'Big Beautiful Bride For The Reluctant Preacher' is tagged as:

Similar books to 'Big Beautiful Bride For The Reluctant Preacher'

Buy 'Big Beautiful Bride For The Reluctant Preacher' from the following stores: