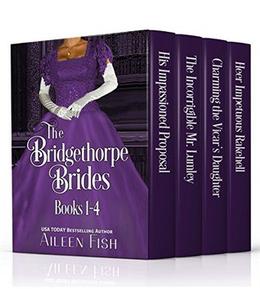 Stephen Lumley returns from battle wounded and jaded, only to find his home life had been changed forever. Drowning his sorrows in liquor, he mistakenly blurts out his impassioned proposal to his sweetheart, Jane.

Lady Jane Marwick fears she has wasted her love on the wrong man, and allows her mother to convince her to plan another London Season to find a husband. The only certainty in Stephen’s life is his need for Jane’s love. Now Stephen only has a few months to convince himself and Jane he is worthy of her, before she’s off to London to find a man who is.

Stubborn. Hard-headed. Single-minded. The qualities that make David Lumley a successful horse breeder are put to work befriending Lady Joanna Hurst with less than noble intentions. He’s tenacious in his pursuit of the answers he seeks.

Lady Joanna falls fast and hard for the handsome, witty and charming Mr. Lumley after her brother’s ultimatum to find a husband by the end of the Season. He is everything she imagined a husband could be, and more. Blissfully unaware of the conflict between their fathers, she believes he’ll declare his love soon. Then she overhears a conversation between Mr. Lumley and her brother, and all of Mr. Lumley’s tenacity will be needed if he’s to win back her heart.

What’s a gentleman to do when the local Widows’ League insists on a marriage over a simple misunderstanding? How does he honor his family name without damaging that of a vicar’s daughter? For Neil Harrow, the journey to obtain a matched pair of horses for his new curricle has taken a wrong turn. While his uncle is not insisting Neil marry Rebecca Cookson, in his heart he knows it’s the thing to do.

Rebecca wants nothing to do with the popinjay who came to her aid, no matter how the situation appeared. The meddling old widows are a formidable opponent, but Rebecca will do everything in her power to avoid such an ill-suited match. As charming Mr. Harrow might be, Rebecca is determined to only marry a man she can love with all her heart.

Laurence Pierce never wanted a wife or children. He preferred his freedom and his bachelor’s rooms in London. Then his cousin, Lord Oakhurst, dies, making Laurence guardian of a four-year-old girl. He knows nothing about children, and even less about girls. In desperation, he turns to the only lady friend he’s never seduced and begs for help.

Lady Hannah Lumley know Laurence for exactly what he is, since he’s been her brother’s closest friend for as long as she can remember. He’s the last man she could imagine as a father, and the very last man her brother would consider letting her marry. Yet one little kiss leaves her unable to think of anything but this impetuous rakehell. Now her Season has taken a twist she never expected, and she’s forced to marry Oakhurst instead of the man she expected to propose.

Laurence hates himself for letting his jealousy overrule his common sense, but Hannah hates him even more. He can give her the family she’s dreamed of, if only she can learn to trust him.
more
Amazon Other stores
Bookmark  Rate:

'The Bridgethorpe Brides Books 1-4' is tagged as:

Buy 'The Bridgethorpe Brides Books 1-4' from the following stores: