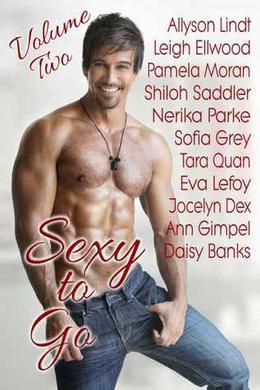 Sexy to Go is back with 11 new stories full of sensuous aliens, shifters, stranded commuters, dominant husbands and naughty neighbors. Check out what’s new in Volume 2 – we promise to tempt, tease, and deliver the hotness you desire!

Lip Service by Tara Quan
Forced into a marriage of convenience, Damien discovers an intense attraction to his new bride. When Kailee's past prevents their pleasure, this dominant groom must teach her the joys of submission.

Neighborhood Watch by Jocelyn Dex
Happily married Astral would never cheat on her husband, but when the moving guy next door sparks her exhibitionist fantasy, will she take it too far and get herself in trouble?

Blackout by Sofia Grey
A breakdown and blackout on the late train home, could be bad news. But for Anton, stuck in a carriage with the sexy stranger of his dreams, it could be the hottest encounter he's ever had.

Roman’s Gold by Ann Gimpel
Devon’s been a cop for a long time, but he can’t get his latest target’s stunning body and coppery hair out of his mind. Maybe an afternoon delight will obliterate his fantasies—at least for a while.

Lust in Bloom by Shiloh Saddler
During cotton harvest Daniel and James spend their days picking and nights in each other’s arms. They must guard against a nosy neighbor intent on taking their farm and separating the lovers forever.

Roll Against Fantasy by Allyson Lindt
A daring trip to a topless beach goes from hot to scorching for Tasha when Ryan pushes all the right buttons, both physically and through fantasy, and strips away her inhibitions.

One More Chance by Nerika Parke
Eleven years ago, Calum was Ella's first love, before her family moved away and they lost each other. With a chance to see him again, she is determined to finally put all thoughts of him in the past. But he proves harder to get over than she'd anticipated.

An Arresting Development by Leigh Ellwood
Shy, geeky Wynton's idea of a good time is a marathon role playing game. After meeting Mitch, he's tempted to put away his seven-sided dice and play something different.

First Contact by Daisy Banks
Clancy hopes to claim first contact with an alien life force. When her dream comes true she agrees development of interstellar relations needs more interaction, and after their first encounter, she can hardly get enough.

Dreamwalker: Nighstcape by Pamela Moran
Reggie and Cliff have a common goal: Keep her patient and his friend from being killed. If they can keep their hands off of each other, they might stand a chance of them all coming out of this alive.

Bound by the Beta by Eva Lefoy
Casi ventures to the alpine music hall once more, and meets a sexy new wolf. His kisses set her aflame, but after their lovemaking end he demands they mate. Will she run or will curiosity and her desire to see Dahlia again make her stay?
more
Amazon Other stores
Bookmark  Rate:

The 'Sexy To Go' series

Buy 'Sexy To Go, Volume 2' from the following stores: