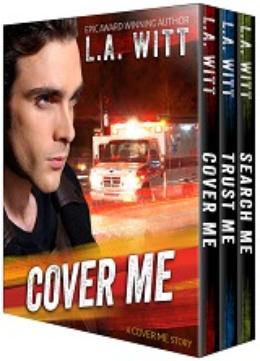 When paramedic Nick Swain responds to a shooting in a seedy neighborhood, his entire world is thrown off its axis. His life is threatened…twice. Allegations of racism and medical neglect threaten his career and his ability to sleep at night. Not that he’ll be sleeping any time soon after the incident throws him into the path—and arms—of Detective Andrew Carmichael.

One hot night after another with Andrew may help Nick relieve some work-related stress, but sex won’t solve every problem in his life. With the media hounding him and the city watching his every move, he starts to wonder if the world is out to get him.

The world may not be out to get him, but someone is.

And that someone wants Nick dead.

On the scene of a multiple murder that’s grisly even for a veteran homicide detective, Brian Clifton is stunned when one of the victims bears an uncanny resemblance to his boyfriend, James. As the similarities keep piling up, so do the bodies… and the evidence pointing to James as the killer.

Since long before the shooting, James has been dishonest. He’s been evasive. Oh, and there’s that minor detail he withheld from Brian about being a gambling-addicted drug dealer.
James may not be the best boyfriend in the world, but he begs Brian to believe he’s no killer. In fact, whoever did pull the trigger undoubtedly wants to finish what they started, and Brian is the only one James trusts to keep him safe.

But how much is Brian willing to risk to protect a man he may not even know?

In the beginning, Detective Andrew Carmichael and paramedic Nick Swain barely escaped Nick’s delusional stalker with their lives. Now, months later, the physical scars haven’t quite healed, and neither have the emotional ones. Lingering guilt and resentment threaten to tear their relationship apart, but Andrew isn’t ready to give up. He’s nearly lost Nick once, and he’s not giving him up this time without a fight.

In a last ditch effort to keep them together, Andrew suggests a weekend away, but is that enough time to find a reason to keep their relationship alive?

Or is it time to let Nick walk away?
more
Amazon Other stores
Bookmark  Rate:

'Cover Me Boxed Set: The Complete Trilogy' is tagged as:

Similar books to 'Cover Me Boxed Set: The Complete Trilogy'

Buy 'Cover Me Boxed Set: The Complete Trilogy' from the following stores: