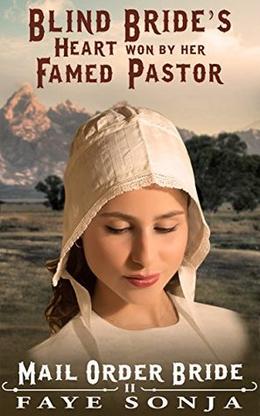 It’s 1905. Come on down to Perry Lake, Kansas’ little spot of parade. Here, you’ll find mystery, adventure, and possibly love.
Three brothers running from their past find themselves in the arms of three strong women. The strong women will make moral men out of three former outlaws.
One brother down, two more to go.

Hannah Grace isn’t sure how she ended up in Kansas. She’d thought she’d board the train for New York, but apparently not. It was so easy to get lost, especially when you’re BLIND.

The train never reaches it’s destination. Instead, it wrecks outside of Kansas City, sending Hannah on an adventure she never thought possible.

When Mark Bishop hears that his potential mail-order-bride’s train has wrecked in the desert, he runs to help pull the survivors out of the train and finds the woman he believes to be his wife.

But there’s just one problem - She’s been blinded by the accident!
Believing that her sight would soon return, Mark marries her.

Hannah never dreamed that she would ever be married and she never dreamed that should would have a man’s love, not a man like Mark. God has answered a prayer Hannah had never dared to ask for. But now that she’s got it, she feel awful for lying to him, allowing him to believe that she was truly his intended bride. Hannah wants to tell Mark the truth but doesn’t know how. Either way, she’ll have to come up with something before it’s too late . . . . .
Before someone else tells him, someone like the shadow that seems to be following her around town.
But once the news is out, will Mark still hold true to the vows he’s made with the perfect stranger?
Is love enough to heal the pain that Hannah’s lies have caused?

“ A story that shows the true power of forgiveness and meaning of a vow. “

This is a sweet and CLEAN WESTERN ROMANCE short story.
Each installment is designed to be read in around two hours, so they're perfect for when you're waiting at appointments or have a few extra minutes to spare.

Each short story can be read as a stand alone but if you wish to read about the story of Katherine and Faith in order the first two books are available for just $0.99 or FREE on Kindle Unlimited.

'The Blind Bride’s Heart Won By Her Famed Pastor' is tagged as:

The 'A Pioneer Western Romance: Brides OF Perry Lake' series

Buy 'The Blind Bride’s Heart Won By Her Famed Pastor' from the following stores: