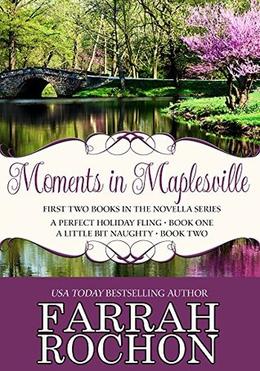 Books One and Two in the “Moments in Maplesville” Novella Series

It’s no mystery why veterinarian Callie Webber is having a hard time getting into the holiday spirit. When the residents of her small hometown aren’t pitying her because of her ex-husband’s very public departure, they’re attempting to hook her up with a man…any man. Fed up with being everyone’s favorite charity case, Callie considers closing her animal clinic and moving to the big city. But, before she goes, she decides to give herself a Christmas treat to remember: a romantic holiday fling. And who better to have a fling with than the gorgeous newcomer who is turning heads around Maplesville?

When injured Navy pilot Stefan Sutherland reluctantly rescues a gutter cat for the sake of his five-year-old nephew, he never imagined it would lead to him discovering Maplesville’s most fascinating attraction…its smoking hot vet. Getting involved with a woman was the last thing Stefan anticipated when he agreed to care for his nephew during his Army nurse sister’s deployment, but if he’s going to spend the holidays in this sleepy Southern town, why not make the most of it with the perfect holiday fling.

Sometimes a girl can't help being a little bit naughty...

Mason Coleman relishes his career as a high-powered tax attorney, but his most important job is keeping the promise he made to his father to watch out for his baby sister...even though she hasn't been a "baby" in thirty years. When he learns that his sister may be in trouble, Mason is forced to call on the one person he's never been able to abide, her brash and sexy friend, Jada Dangerfield. There's just one problem...how does he stop Jada from corrupting his sister with her kinky new business?

When this unlikely pair is forced to work together, things get a little bit naughty.
more
Amazon Other stores
Bookmark  Rate:

'Moments In Maplesville Bundle Edition: A Perfect Holiday Fling & A Little Bit Naughty' is tagged as:

All books by Farrah Rochon  ❯