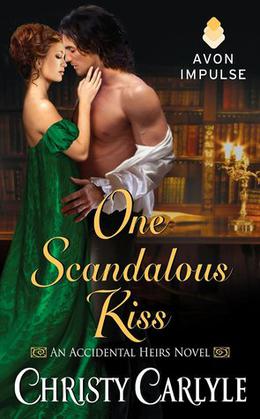 When a scheming marquess' daughter offers her one hundred pounds to publicly kiss a nobleman, a desperate Jessamin Wright agrees. She believes the money will save her failing bookstore and finally free her from her father's debts. But when Jess bursts into an aristocratic party and shocks the entire ton , she never expects to enjoy the outrageous embrace she shares with a grim viscount.

Lucius Crawford, Viscount Grimsby, has never met, or kissed, anyone like the beautiful suffragette who unsettles him with a single touch. He has always strived for control and avoided passion at all costs. Lucius is determined to protect his title and restore the estate he's unexpectedly inherited, but Jess' appearance in his life poses a threat to his plans and his heart. After a country house party brings them together once more, neither can resist temptation, and both find that one scandalous kiss just isn't enough.
more
Amazon Other stores
Bookmark  Rate:

'One Scandalous Kiss' is tagged as:

Similar books to 'One Scandalous Kiss'

Buy 'One Scandalous Kiss' from the following stores: