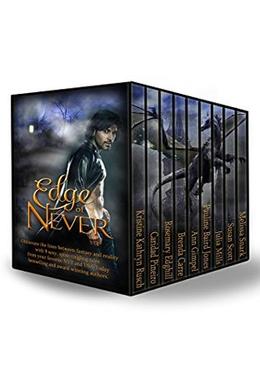 Join us at the Edge of Never

Obliterate the lines between fantasy and reality with nine spine-tingling tales from your favorite bestselling and award winning authors. Dragons, gods--fallen and otherwise--ghosts, vampires. A touch of steampunk. More than a splash of romance. From magical lands to a chilling glance into post World War II Europe, Edge of Never has something to tempt everyone.
Caridad Pineiro: Undead Uprising: A Wolf Alone - Will she lead her pack in a war against the vampires or will she sacrifice everything for the human she loves?
Rosemary Edghill: Lizzie Fair and the Dragon of Heart's Desire - Visiting the World of Iron is never a good idea. Ask any Morning Lord.
Kristine Kathryn Rusch: Show Trial -A beautiful woman, a terrible time, and faerie justice...served cold.
Brenda Carre: Finnraziel - She raised a god to life and thwarted the Queen of Demons, can she prevent a war without destroying the man she loves and the last two dragons she's sworn to guard?
Ann Gimpel: Highland Secrets - Tumble off reality's edge into myth, magic, Scottish dragon shifters, and forbidden romance.
Pauline Baird Jones: Specters in the Storm - A just-the-facts professor needs to trust a time bending lady detective--and believe the wildly impossible--to defeat a deadly evil threatening everything they hold dear.

Julia Mills: Her Dragon's Soul - Exorcise the demon possessing your mate. Capture the maniacal wizard. Save dragon kin...again. Even the strength of the Universe may not be enough. Only time will tell. Fate Will Not Be Denied!
Susan Scott: Dragons Will Fall - To defeat a dragon is impossible. To love a dragon--deadly!
Melissa Snark: Hunger Moon - Wolf shifters, hunters, and a Norse winter witch--How will Valkyrie Victoria Storm ever find her true love...before someone kills her?
more
Amazon Other stores
Bookmark  Rate:

'Edge of Never: A Unique Paranormal Romance/Urban Fantasy Boxed Set' is tagged as:

All books by Caridad Piñeiro  ❯