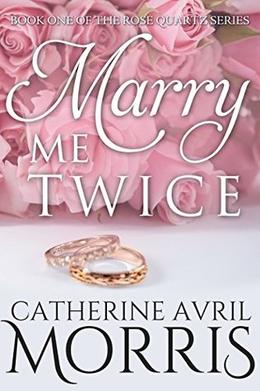 A love festival, an ancient legend, an online Marry Mason contest, and a surprise marriage of convenience...

What could possibly go wrong?

Plain Janie Adams may be a rule follower, but she’s no fool. When her sleazy boss dangles a promotion in front of her — a dream job producing TV news — she takes off for tiny Rose Quartz, New Mexico, to produce a feature on the town’s annual Valentine’s Day festival. Rose Quartz is famous for two things: its successful marriages, and its namesake mines that produce the mystical Love Stone, reputed to keep lovers true.

But what starts out as a simple assignment gets outrageously out of hand when sexy Mason Hart enters the picture. Owner of the last mine in town still producing the Love Stone, Mason is annoyingly brash, hotter than hell, and — thanks to a ludicrously antiquated family tradition — in a serious bind: If he doesn’t marry by his thirtieth birthday, just two weeks away, he’ll lose all claim to the family mines and ranch forever.

As an old legend resurfaces and Rose Quartz begins to work its magic, life as Janie knows it starts doing cartwheels. Voluntarily abandoning her hometown and what she thought was her perfect job, Janie shocks everyone — especially herself — with an impulsive dive into a marriage of convenience. But as she begins to re-envision the person she thought she was, she realizes her sham of a marriage is truly just a business deal, and her gorgeous husband is nothing but a stranger.

Will she end up losing Mason — or will she wind up gaining the life and love of her dreams?

MARRY ME TWICE is Book One of the Rose Quartz series. It is a contemporary romance novel set in small-town New Mexico. Book Two, CASSIDY'S DADDY, is also available on Amazon.

HEAT LEVEL: 3 Hatch Chili Peppers (out of 5) — This novel contains two to three fully developed lovemaking scenes, plus plenty of sexual tension between the hero and heroine.
more
Amazon Other stores
Bookmark  Rate:

'Marry Me Twice' is tagged as:

Similar books to 'Marry Me Twice'

Buy 'Marry Me Twice' from the following stores: