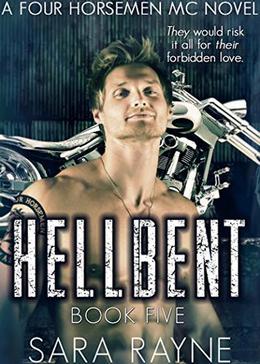 Think on your sins. Shepherd does it every damn day. He pays his penance in service to his MC—keeping their secrets, guarding their gates, shouldering their burdens. But his own secrets threaten to bury him. Secrets bigger than forbidden temptations. Secrets older than his loyalty to the club. Secrets deeper than the grave he'll take them to. And there's only one thing—one person—that he'd sacrifice it all for.
Pretty Boy spent a lot of his life wandering in the darkness and the rest of it following Shepherd to the Promised Land of the Four Horsemen MC. Once upon a time, Shepherd sacrificed everything to keep Pretty Boy safe and he's hellbent on proving to Shepherd that it wasn't for nothing. That he isn't nothing.
more
Amazon Other stores
Bookmark  Rate:

'Hellbent' is tagged as:

All books by Sara Rayne  ❯

Buy 'Hellbent' from the following stores: