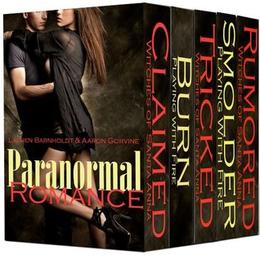 THE WITCHES OF SANTA ANNA
Natalia Moore is the new girl at Santa Anna Prep, and all she wants to do is fly under the radar -- get to her classes, meet a few friends, and try not to make a total fool of herself in the meantime. But when handsome and popular Campbell Elliot goes out of his way to be nice to the new girl, Natalia's plan to go unnoticed flies out the window.

Cam’s hot, but he’s completely off-limits. Raine Marsden, the most popular and meanest girl in school, has had her eye on him ever since the summer. And Raine doesn’t like competition.

When Cam goes as far as inviting Natalia to the exclusive weekend party at Raine's house, Raine sets her sights on a new victim. But what Natalia doesn't know is that Raine and her friends are no ordinary mean girls. They have powers most people can only dream of, and nobody will stand in the way of what they want. And what Raine wants is Campbell.

The Witches of Santa Anna series of novellas proves just how far true love will go and that nothing--not even pure evil--can change your destiny….

PLAYING WITH FIRE
Emily Bowers is supposed to be having a relaxing summer vacation with her parents on Cape Cod. But almost immediately upon her arrival, mysterious strangers begin to appear, and dark family secrets start to get revealed.

Emily’s very soul is in danger, and someone – or something – is coming to collect. And it turns out that Lucas, the hot, enigmatic boy whose family owns the house Emily’s staying in, may just be the only one who can help her escape a fate worse than death.

From the authors who brought you the hit series The Witches of Santa Anna comes a paranormal romance series that proves that first impressions aren’t always what they seem, and that in the battle between good and evil, love is the only thing that matters.

Buy 'YA Paranormal Romance Boxed Set' from the following stores: