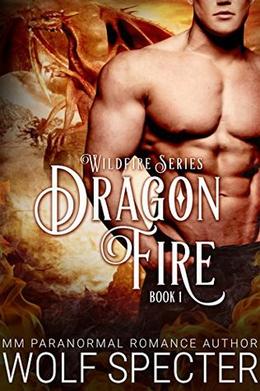 Ancient dragon shifter and arson investigator Liam Morgan has fought against his instincts to take a mate and sire a child for centuries, but now his dragon is fighting back. When a new case puts him face to face with an insanely attractive officer who sports a dragon tattoo, it's all Liam can do to resist the urge to claim the man as his mate.

With a serial arsonist on the loose, Shane McKenna finds himself turning to Liam to help solve a case that could finally give him the respect he deserves.

But he never expected to find a much-needed kinship with the stoic scientist. And he definitely never expected to dream about Liam in a way that leaves him questioning his sexuality... and craving the touch of one very specific man.

As their case--and their relationship--heats up, Liam can't fight the powerful force that draws him to Shane.

But claiming him has dire consequences. When an old enemy threatens to once again destroy everything Liam holds dear, he'll stop at nothing to protect his mate and their unborn child.

Dragon Fire is a standalone novel with a HEA ending, a satisfying epilogue, and NO CLIFFHANGERS!

Content Warning: This book is a first time gay for you / straight to gay romance. It contains explicit, unprotected love scenes and male pregnancy, or Mpreg. Adults only shifter romance!
more
Amazon Other stores
Bookmark  Rate:

'Dragon Fire' is tagged as: