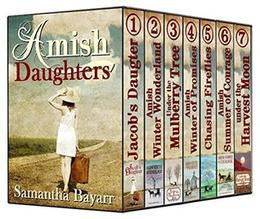 JACOB'S DAUGHTER
Twenty-eight-year-old LIZZIE BARLOW is running from her past and present mistakes. Not knowing which direction to go, she finds herself hiding out in the same Amish community in which she grew up. With her ten-year-old daughter Abby, in tow, she fears her secrets will catch up to her.

When ABBY discovers her real father may be living just down the road from where they are staying, she sets off on an adventure to meet him. What she doesn't know are the many secrets that her mother never shared with her--the same secrets that will turn her life upside down.

JACOB YODER is an Amish widower, trying to raise his ten-year-old son, when his past shows up on his doorstep unexpectedly, threatening to change his life forever.

AMISH WINTER WONDERLAND
Twenty-five-year-old LILLIAN STOLTZFUS is living in the shadow of her deceased brother. When her dad gives her the gift of land that would normally go to the eldest son, it includes a bakery he built as an offering to a suitor for her. No one wants marriage for Lillian more than she wants it for herself, but at twenty-five, she fears she will end up a spinster if Seth never returns her secret feelings for him.

Thirty-year-old SETH MILLER is loaded down with the responsibility of caring for an overbearing father. His loyalty to his father's farm has caused him to put his own needs on hold his entire adult life. Being secretly in love with Lillian for many months, he finds it difficult to speak to her because he lacks the confidence having never dated before.

Will the contents of an old spice box change everything for both of them? Or are they destined to admire each other from afar indefinitely?

UNDER THE MULBERRY TREE
Lizzie's lies from the past have finally caught up to her, and are wreaking havoc in Abby's life.
When Abby and Jonah Beiler get branded by the youth in the community as "kissing cousins", will the truth be able to set them free, or will it be too late?
Find out in this story of forbidden love...

AMISH WINTER OF PROMISES
Caleb has a secret he's kept to himself for too many years. When he crosses paths with Katie Graber, the new school teacher, he discovers she has a secret of her own.
Hoping for an opportunity to get out of a prearranged marriage to a man she doesn't love, Katie enlists the help of Caleb. In exchange, she must agree to help him change his own life to overcome the shame his secret has brought him. The two of them make a promise to help one another, and to keep each other's secrets. But those secrets will change things in a way neither of them could have ever expected.

CHASING FIREFLIES
After tragedy struck Noah Beiler's life nearly two years ago, he turned his back on his faith and the community. No one except Rose knows he has remained in the dilapidated home that overlooked the pond that he'd grown to despise.
When new tragedy strikes, he is forced out of hiding.
Will chasing fireflies on a warm, summer night change his life forever?
Find out in this tale of summer love...

AMISH SUMMER OF COURAGE
Lizzie's troubled past has finally come full circle.
When Levi Schrock shows up to work as a hired hand on her father's farm,
no one suspects he's an impostor A chance meeting with her daughter, Rachel, on his first day in town could change Levi's mind about his plans, as well
as his heart.

UNDER THE HARVEST MOON
Lila King pays a visit to her uncle Jessup and her new Aunt Bess at the B&B, and ends up getting into the middle of more than she bargained for in this final look into the lives of the families you have come to know in the Jacob's Daughter series.
more
Amazon Other stores
Bookmark  Rate: