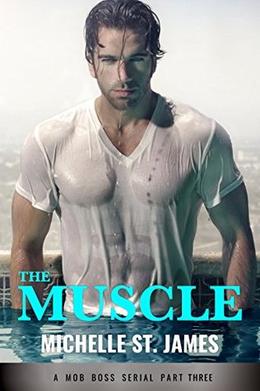 ***This is the final book in a three part serial featuring the smoking hot Luca Cassano from the Mob Boss Series (RUTHLESS, FEARLESS, and LAWLESS). That series and The Muscle are independent of each other -- you can read either one first.***

Luca Cassano never needed anyone. Least of all a woman.

But from the moment he met Isabel Fuentes, he was determined to save her from the vile clutches of her brother, Diego, one of Miami’s most deadly kingpins. Then Luca made a bold attempt to free Isabel and her little sister, Sofia, and Diego took Sofia and disappeared into thin air.

And Luca is going to kill the bastard when he finds him.

Isabel is sick with worry. No one should be under the control her vicious brother, least of all her sweet little sister. And it’s all her fault.

Her fault for trying to steal the horrific video Diego was holding over her head.

Her fault for letting Sofia out of her sight.

Her fault for falling in love with Luca, the only man who could bring her body and soul to life.

Now an alliance with a man even more dangerous than Diego may be the only way for Luca and Isabel to find Sofia — and win a chance at a future together.
more
Amazon Other stores
Bookmark  Rate:

'The Muscle: Part Three: A Mob Boss Serial' is tagged as:

Buy 'The Muscle: Part Three: A Mob Boss Serial' from the following stores: