Baron Of Godsmere (The Feud #1) 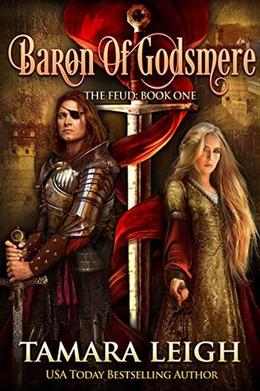 THE FEUD
England, 1308. Three noblemen secretly gather to ally against their treacherous lord. But though each is elevated to a baron in his own right and given a portion of his lord’s lands, jealousy and reprisals lead to a twenty-five year feud, pitting family against family, passing father to son.

THE DECREE
England, 1333. The chink in Baron Boursier’s armor is his fondness for a lovely face. When it costs him half his sight and brands him as one who abuses women, he vows to never again be “blinded” by beauty. Thus, given the choice between forfeiting his lands and wedding one of his enemies to end their feud, he chooses as his betrothed the lady said to be plain of face, rejecting the lady rumored to be most fair.

THE ENEMY
On the eve of the deadline to honor the king’s decree of marriage, the fair Elianor of Emberly takes matters into her own hands. Determined none will suffer marriage to the man better known as The Boursier, she sets in motion her plan to imprison him long enough to ensure his barony is forfeited. But when all goes awry and her wrathful enemy compels her to wed him to save his lands, she discovers he is either much changed or much maligned. And the real enemy is one who lurks in their midst. One bent on keeping the feud burning.

NOTE: BARON OF GODSMERE is a romance wrapped in an inspirational message true to the time period often referred to as “The Age of Faith.” Due to an integral part of the plot—that of a woman whose past causes her to fear even a husband’s intimacy—it isn't tied up with a bow too sweetly pretty to untie. Hence, due to the hero’s efforts to court his lady, this romance is more a “Clean Read” than an “Inspirational Read.”
more
Amazon Other stores
Bookmark  Rate:

'Baron Of Godsmere' is tagged as:

The 'The Feud' series

Similar books to 'Baron Of Godsmere'

Buy 'Baron Of Godsmere' from the following stores: