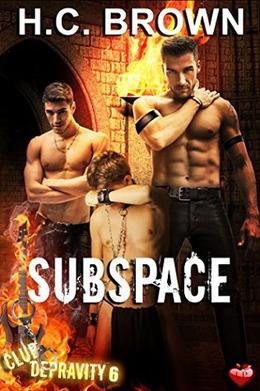 When Damon Lace, the lead singer of heavy metal band Satan’s Army, wants something, he usually gets his way in and out of the dungeon.

The temptation of becoming the sweet vanilla virgin dancer’s first lover is driving him crazy, but he has a small problem.

He wants Syn Clearwater as well.

He craves to have the two delicious boys under his flogger at the same time.

Two subs tied, their pale skin red from his special attention and both begging for more.

With Syn due to leave on tour with his band, Damon will have to be his devious best, to get both men into his dungeon.

“Oh yeah, you’ll wanna be there when I push my two sweet pups into subspace.” —Damon Lace.
more
Amazon Other stores
Bookmark  Rate:

'Subspace' is tagged as:

Buy 'Subspace' from the following stores: