Given to the Alien 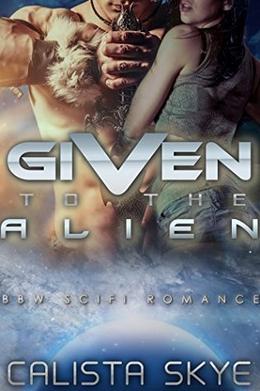 Olivia Cooper chose a bad time to become a space marine in the newly formed Space Force: Just when Earth had been badly defeated in mankind's first battle with the beautiful, but deadly Ethereal aliens.

Earth desperately needs help in the desperate war against the aggressive aliens, and help seems to be at hand when the alien General Ator'aq and his Braxians offer their assistance. But even if Ator'aq is sensationally handsome and powerful, he and his men also seem like primitive barbarian warriors. Can they really win against the sophisticated Ethereals?

And Ator'aq won't fight for free. His price: An Earth female who can be the mother to his heirs. Spirited Olivia fits his tastes perfectly, and the leaders of Space Force agree to give him the curvy and feisty space marine in exchange for his help against the lethal enemy. But they don't bother to tell Olivia about the deal...

But Olivia has secrets of her own, and the fact that she's a specially trained operative for Military Intelligence is only one of them. When the horrific Ethereals strike again and kidnap her little sister, she has to make a choice: Ator'aq or Space Force?

This is a complete, full-length romance novel with no cliffhangers and a happy-ever-after ending!
more
Amazon Other stores
Bookmark  Rate:

'Given to the Alien' is tagged as:

Similar books to 'Given to the Alien'

Buy 'Given to the Alien' from the following stores: