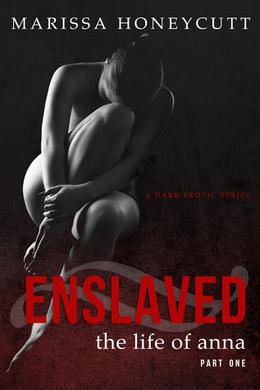 Enslaved (The Life of Anna #1)

Anna's entire life was scripted out before she was born by Devin Andersen, a man who doesn't have her best interests in mind. She is to be a tool in his hands to gain ultimate power in the USA. No, not as the President, but as the man who controls the President.
Raised by an extremely abusive guardian, Anna was molded into the perfect sex slave for Devin's use. Devin will use Anna's unique gifts to control everyone around him and eventually take her gifts for himself.
When Devin took her for himself at the age of twelve, she had a vision of a man. A man who Devin was very interested in. But why? Why would Devin care about a little girl's dreams?

This series is for mature adults. This series is not for people who are easily offended, get nightmares easily, or have difficulty reading books about sexual, physical, emotional abuse and torture.

Book 1 is the lightest of the series. It is an introduction to Anna's world. If Book 1 is too dark for you, please do not continue the series. If it's not dark enough for you...heheheh...just wait. :)

Not everything happens in the first book, but by the time you've read the series, you will have seen it all.

Do not read this if you are under the age of consent in your country. Do not get angry if the subject or actual book upsets you. If you're reading this, you've been warned.

But, I do promise a satisfying Happily Ever After.

Warning: This book has been known to cause book hangovers.
more
Bookmark Rate Book
Amazon Other stores

The 'The Life of Anna' series

Embraced
Embraced
(The Life of Anna #3)

Entwined
Entwined
(The Life of Anna #2)

All books by Marissa Honeycutt  ❯

Buy 'Enslaved' from the following stores: