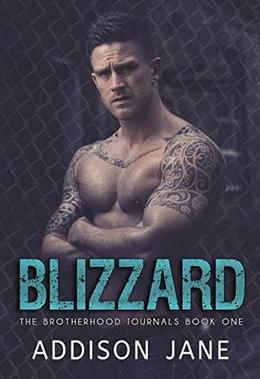 For Blizzard, the feeling of betrayal was one he knew well.

His father was a long-time member of the Brothers by Blood MC. He believed the brotherhood came first, even before his wife and child. At first Blizzard didn't even blame his mother for walking out on them. That was until he learned that she’d hooked up with a member of another MC, leaving him behind to deal with the aftermath.
He never thought he would feel that kind of pain again, swearing that his back would never again see the blade of another knife. That was until Rose came along, tempting him, drawing him in and then leaving him on the sidewalk, fighting for his life as she walked away with the enemy.

Rose had spent her whole life wondering where she’d come from.

Her mother had always kept that information to herself, taking it with her to the grave. She was determined to know her history and her father but soon found it wasn't the reunion she’d hoped for. She may have escaped the hands of a madman, but the family she’d been left with still didn't fill the void she had inside.
Rose had made many mistakes, hurting people who cared for her and destroying herself in the process. She was heading down a dark road and returning to the town where she lost herself—and her heart—was never part of the plan. When given the opportunity for redemption and with nothing left to lose she was about to throw herself back into hell. But karma against her, this time there might not be anyone coming to her rescue.

They say time heals all wounds, but time is running out. Could you forgive and forget if it meant the difference between life and death?
more
Bookmark Rate Book
Amazon Other stores

The 'The Brotherhood Journals' series

All books by Addison Jane  ❯

Buy 'Blizzard' from the following stores: