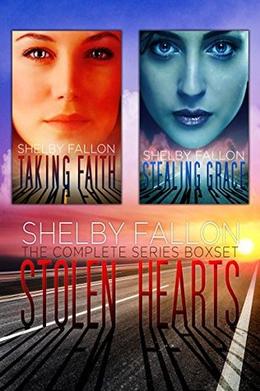 An Inspirational Romance, two-book series by NEW YORK TIMES and USA Today Bestselling author, Shelly Crane, writing as Shelby Fallon. It shows an intense love story that exhibits how love can withstand anything and take us anywhere if we're willing to stay on the ride.

Elena is young, on the run, and alone. She left her troubled family to start a new life for herself. But she's kidnapped one night waiting on the bus and soon learns she's been sold to be a wife on the human trafficking market. Her new husband takes her home and she waits for the abuse to start.

Alex is different than any other man she's ever met, and though he stole her from her non-existent life, Elena learns that maybe there's more to the story. Maybe there was a purpose. She never believed her Grandmother's talk of God, and miracles, but wanted to. Now, God may be the only one who can them. Can she help save the other women who are stuck in hell with her?

Most importantly, can she allow herself to love the man who kidnapped her?

Amy was taken, right along with Elena, from her life. Roger is harsh to her. He barely speaks to her except to tell her to do things around the house. He barely looks at her, as if he doesn't know what to do with her. She was afraid. Afraid that he would make her his wife in every way against her will...but he hasn't, and she wonders why. She wonders what is it that Roger wants with her...after he stole her to be his wife.
more
Amazon Other stores
Bookmark  Rate:

'Stolen Hearts Boxset' is tagged as: