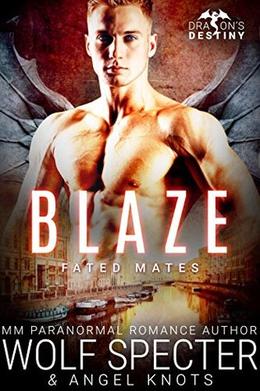 A dragon who doesn’t know how to love….

Fate hasn't been kind to Ivan, but he doesn’t blame her. He's spent the last couple of centuries doing terrible things to the humans who live in the Eastern European territory once claimed by his sire, Nikolai... which makes him the last person with any right to expect kindness from something as fickle as fate.

It doesn’t matter that he’s changed, Ivan knows that some things are simply unforgivable.

Now, for the first time in his life, Ivan has people he can claim as friends. He knows he’s not good at friendship—and certainly not worthy of anything like the love he sees between the other dragons and their mates—but that doesn’t stop him from wishing things could be different.

A soldier who loves dragons…

Ty is dragonkind’s biggest fan. Three years ago, he’d learned that the majestic, fire-breathing creatures really exist when his twin brother was claimed and impregnated by one, and he now counts all the North American dragons among his closest friends. Ty loves everything about dragons; their loyalty, their protectiveness, their unconditional devotion to their fated mates.

He’s never admitted it to anyone, but Ty secretly dreams of being claimed by a dragon of his own.

That’s impossible, though. For one thing, dragons are male, and Ty isn’t gay. For another, all the ones in Europe--where he’s currently stationed with the U.S. Army—are evil… and evil is the thing Ty idealistically enlisted to fight against.

A destiny worth fighting for...

When a human and a dragon share a soul, fate won’t let anything stop her from bringing them together. But unfortunately, that isn’t any guarantee that life won’t find other ways to pull them apart...

Blaze is the fourth book in the Dragon’s Destiny: Fated Mates series. It is a standalone novel with a HEA ending, a satisfying epilogue, and NO CLIFFHANGERS!

Series Spoilers: Although it’s not necessary to read this series in order, Blaze contains “spoilers” for the first three books in the series.

Content Alert: This book is a steamy gay romance of approximately 100,000 words that includes a tea-drinking dragon who loves to cook, a potty-mouthed soldier who drops 797 F-bombs before finding his happily ever after, and male pregnancy, or Mpreg.

'Blaze' is tagged as:

Buy 'Blaze' from the following stores: