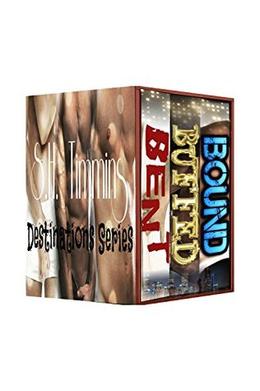 Three best friends find themselves falling like dominoes - falling in-love that is. No one said love comes easy, and these friends find out just how true that saying is. Join them in their individual tales of how hard and hilarious they fall.
Bent
Alex Bradley has the life of a self-made playboy. He owns one of the hottest clubs around with his two best friends. The women were plentiful and easily seduced by his charms and good looks.
One night, he meets the woman of his most erotic fantasies. While high on lust over this vision of beauty, he makes a most painful mistake which alters his life forever.
Join him as he shares his hilarious story by recounting the events that took him from an elusive playboy, to the perfect mate.
Buffed
Dante Valdez, was the ultimate Bad Boy. Men feared him, and women wanted him.
A series of events tests his careful control, and a forbidden women tempts his dominant desires.
An undercover assignment threatens to expose more than just what lies beneath his clothes.
His perfectly ordered world is thrown into chaos, hilarity ensues, and his friends are there to add in the hijinks.
Join him as he shares his story of humiliation, humor, and hope.
Bound
Logan Crawford thought he had his whole life planned out; own a business with his two best-friends, enjoy the company of the bevy of females that flock around his Hollywood good-looks, and NEVER fall in love.
He was so wrong.

A tragedy in his past holds him hostage, to promises made by a scared teen - preventing him from letting go - until one woman, and an unlikely new friend, grab hold of his life, and force him to break-free from the chains that have bound him for so long.

The events that free this Adonis, don't come without plenty of hilarity and humiliation - much to the delight of his two friends, who have been waiting for this god's fall from grace. Join him as he shares his tale of humor... and hope.
more
Amazon Other stores
Bookmark  Rate:

All books by S.H. Timmins  ❯