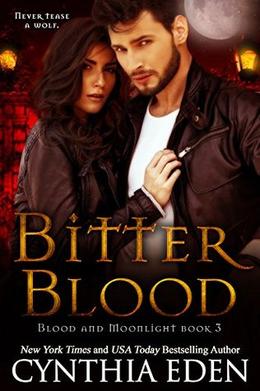 Some bonds go deeper than blood…they go to the very soul.

New Orleans detective Jane Hart is a vampire. She craves blood, has supernatural strength, and when the mood hits her just right, she can grow one killer pair of fangs. She never counted on being a vamp, but she also never counted on falling hard for werewolf alpha Aidan Locke. Now she’s mated to the wolf, and even though she’s living the undead life, Aidan refuses to leave her side.

But Jane is being watched, hunted…tested. And each deadly test that she faces puts Jane—and the people she loves—in the path of a determined killer. She has to find out who is setting her up, before it’s too late. Too late for Jane. Too late for Aidan.

He claimed her…and she obsessed him.

Because now her lover is the one who is changing. Jane’s blood has infected Aidan and the wolf that lives within him is fighting for survival. Each battle…each dark test that their enemy puts in their path…each move slides Aidan closer to the edge. A darkness is growing inside of him. A darkness that is slowly consuming the man he’s been…
And leaving only the monster behind.

When blood and darkness rule, even mates can be torn apart.

In the final book of the BLOOD AND MOONLIGHT trilogy, Jane and Aidan will find out who they can really trust…and who has been waiting to destroy them all along. Are you ready for the end?
more
Amazon Other stores
Bookmark  Rate:

'Bitter Blood' is tagged as:

The 'Blood and Moonlight' series