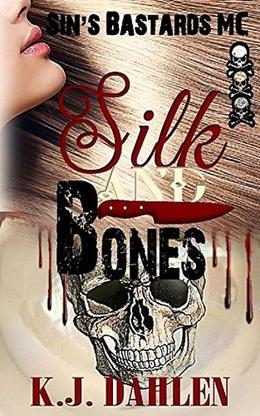 THE NEXT STORY IN THE BESTSELLING MC SAGA

When Sam Tory discovers what he thinks is a thief, he’s stunned to find it’s a woman with a secret. The kind of secret that could get someone killed. It’s already cost one man his life. She doesn’t want to share her secret but Sam won’t let her go. Instead, he brings her to Deke and the Sin’s Bastard brotherhood, hoping they can help her.
Melora has been running for the last two years but Deke and Sam convince her now is the time to stand and fight. Then her past comes knocking and she finally meets her father for the first time in her life. When she realizes he’s been looking for her for some time, she’s not sure what to think. He’s been missing all her life but now he wants into her business. Melora just wants to disappear but the men in her life won’t let her. Can she survive a face down with the man who wants her dead?
more
Amazon Other stores
Bookmark  Rate:

'Silk And Bones' is tagged as:

Similar books to 'Silk And Bones'

Buy 'Silk And Bones' from the following stores: