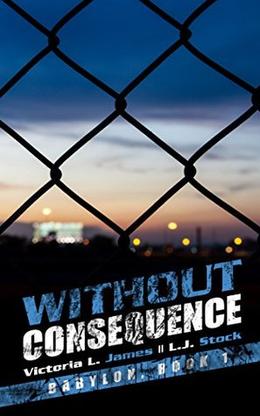 There are two kinds of prison sentence that try to break us: the ones served behind iron bars and the ones served through a lifetime of guilt. Some people are handed just one. The unfortunate are given both.

Drew Tucker, despite his formidable reputation, was a man shrouded in darkness who had been dealt every kind of sentence known to man. His only path of survival was to fight and conquer. After five years of solitude, with nothing to keep him company but old ghosts and relentless demons, Drew was finally out, and he had a plan in mind to reign supreme once more.

But everything had changed since he’d left the small town of Babylon, Texas, and where he once fit into the world around him, he now felt misguided, misplaced and misunderstood. Freedom wasn’t free anymore and it sure as hell didn’t come cheap.

That only got worse when he crossed paths with Ayda Hanagan. Legal guardian of her teenage brother, over worked, underpaid and clinging onto sanity by the skin of her teeth, Ayda should have been easier for Drew to beat down and manipulate. She should have been easier to keep quiet. But, as with everything in his life since he got released, nothing seemed to make any damn sense, and the walls were caving in on Drew now more than ever before.

Determined to stay on the road he was born to travel, he was willing to fight whoever got in his way or blocked his path to the top. Even the blue-eyed blonde who seemed to have more mouth than sense. His actions were about to shake up the whole town again, and Drew didn’t care whether that came with or without consequences, or what the hell that meant for the likes of Ayda Hanagan.
more
Amazon Other stores
Bookmark  Rate:

'Without Consequence' is tagged as:

Similar books to 'Without Consequence'

Buy 'Without Consequence' from the following stores: