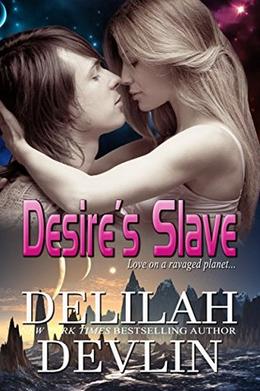 Love on the edge of the galaxy...

After a fellow convict is murdered on her watch, Calandra Jones escapes the ship of the pirates who liberated the convicts, determined to make it on her own. She doesn't need anyone and doesn't want anyone depending her ever again. Just as she's attempting to arrange passage on another ship headed for a mining colony, she's abducted by a handsome trader bent on offering her for sale at a potentate's auction.

Drago Chavez doesn't understand Calandra's opposition to his plan. As a concubine or wife to a powerful man, she would be pampered and influential. No woman he's ever placed has complained about being sold into the arms of a caring owner. Besides, his acquisition of the rebellious beauty is his entrée into a lucrative and exclusive market.

Calandra considers Drago's goal nothing short of sexual slavery and vows to seduce the trader into changing his mind about offering her for sale. A sensual storm erupts during their desert odyssey that culminates when Calandra is sold, and Drago must decide whether he trusts their love enough to launch a rescue.
Warning! This book was previously released as Slave of Desire, but has been revised. Plus, if plenty of gratuitous, graphic sex (mf, fmf, sex on a stage, voyeurism), isn't your cup of key, give this one a skip!
more
Amazon Other stores
Bookmark  Rate:

'Desire's Slave' is tagged as: