So Far Away (California Dreamers #2) 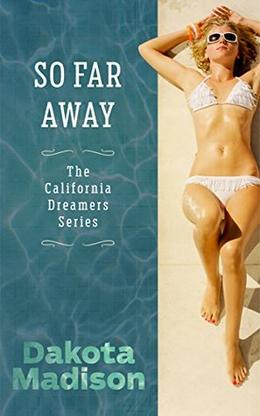 After being at the center of a sex scandal that made national headlines a former nanny tries to rebuild her life by becoming a personal assistant to a reclusive writer.

What happens after your 15-minutes of fame are over?

Find out in SO FAR AWAY, a romantic comedy novella by USA TODAY BESTSELLING AUTHOR Dakota Madison.

Maddie Malone is the nanny who made national headlines. She’s the temptress who broke up the marriage of two of Hollywood’s most beloved movie stars. She’s the girl everyone in America loves to hate.

Now two months after the Nannygate sex scandal Maddie is desperate to rebuild her life.
She accepts a position as a personal assistant to the reclusive writer, Jackson Drake. He’s fired every one of the assistants his manager has sent him within the first few days of employment, but Maddie is determined to do whatever is takes to make her new job work.

Maddie is able to follow every one of Jackson’s eccentric rules to the letter. That is until Emerson Drake shows up for Spring Break. He’s Jackson’s son from an affair he had with Bahamian creative writing student when he taught at UCLA. He’s the son who Jackson has somehow managed to keep hidden from his fans for all these years.

CALIFORNIA DREAMERS is a series of interconnecting romantic comedy stories that can be read as STAND ALONE NOVELLAS or as part of the SERIES.

'So Far Away' is tagged as:

Similar books to 'So Far Away'

Buy 'So Far Away' from the following stores: