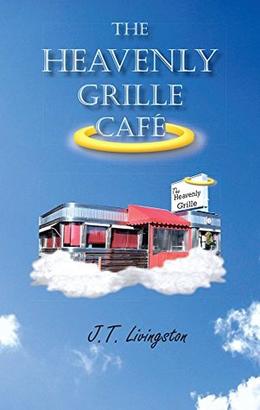 Amanda Turner is a young woman who has recently lost everything: her parents, her home, and her job. She packs all of her belongings into her old car and drives north from Tampa, FL for several hours until she comes upon an out-of-the-way restaurant, accen-tuated by a huge golden halo instead of the more well-recognized golden arches. Th e Heavenly Grille Café is operated by three angels who take Amanda under their wings (no pun intended): Max was once a Roman Gladiator; Bertie was a loud and boisterous housewife who died unexpectedly in 1911, leaving behind a husband and two children; and Doug was a strong, handsome soldier who died serving his country in 1953. Amanda meets another young woman, Kris DeVone, who is completely opposite to herself in character and personality. While Amanda is a happy, secure Christian with tremendous faith, Kris has done everything in her power to be the ultimate "bad" girl, and does not believe in God. Amanda befriends Kris, who is seven months pregnant and has been abandoned by her live-in boyfriend. Th e women become best friends and move in together so that Amanda can help take care of the baby girl, Charlotte Grace, who is born in September 2011. By the time Christmas rolls around, both of their worlds have been turned upside down with the shocking kidnapping of Charlotte Grace. Th e next two months provide insight into Kris’ eventual relationship with God, the angels’ inability to change destiny, and a look into the lives of the kidnappers, Jack and Susan Peterson, and the reason behind why they committed such a horrible crime.
more
Amazon Other stores
Bookmark  Rate:

'The Heavenly Grille Café' is tagged as:

Buy 'The Heavenly Grille Café' from the following stores: