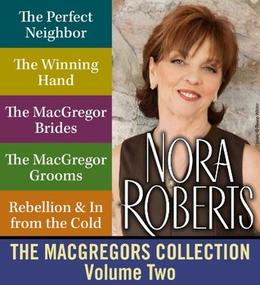 The Perfect Neighbor
When he moves into a new building, the last thing Preston McQuinn wants is a nosy neighbor—especially one as vivacious as Cybil Campbell. But she’s a welcoming committee that’s hard to ignore. Thin walls and thick defenses prove to be no match for her irresistible charm.

The Winning Hand
Taking the biggest gamble of her life, Darcy Wallace slips her last three dollars into a slot machine—and hits the jackpot. But the real prize is casino manager Robert MacGregor. He’s not the marrying kind, but Darcy knows that true love is worth the risk…

The MacGregor Brides
There is nothing Daniel MacGregor would rather see than his three eldest granddaughters—Laura, Gwendolyn, and Julia—married. But the three cousins have one-track minds, and love is taking a back seat to career success. Until Daniel handpicks three unsuspecting candidates for grooms—and throws them in their paths…

The MacGregor Grooms
Fresh from the success of sending his granddaughters down the aisle, Daniel MacGregor turns his matchmaking sights on his stubbornly single grandsons: D.C., Duncan, and Ian. And though each man will put up a good fight, they’ll be no match for the women chosen by Daniel to tempt and tease them all the way to the altar.

Rebellion & In from the Cold
Set in 1745, Rebellion tells the story of Serena MacGregor, whose hatred of all things English extends to her brother’s friend Brigham Langston. He’ll prove himself worthy of the MacGregor’s respect, but piercing Serena’s pride will take all the passion he can muster.

In from the Cold follows the MacGregors during the American Revolution. Injured minuteman Ian MacGregor flees into the wilderness, where he finds refuge for his body and soul with Irish spitfire Alanna Flynn.
more
Amazon Other stores
Bookmark  Rate:

'The MacGregors Collection: Volume 2' is tagged as:

Buy 'The MacGregors Collection: Volume 2' from the following stores: