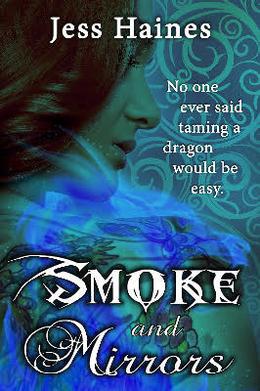 A girl who uses her illusions to fool the world into thinking she's just like all the other magi.

A dragon who sees through her lies.

Together they just might survive a world that wants to control or destroy them both.﻿

Kimberly may wield ultimate cosmic power, but even a mage has to pay the rent. No one will hire her for her magic talents until she's got the credentials, so she’s stuck in a crappy rent controlled apartment with her mother, yearning for treats she can't afford at her part time job in a café, counting down the days until she graduates the secret Blackhollow Academy school for magi. Only then will she have the certificate she needs to land her dream job in a coven.

The problem? She needs a familiar to graduate.

As an illusionist, she doesn't have the ability to summon or create a familiar of her own. Her only option is to convince a supernatural creature to let her bind it instead. Since having a powerful Other at her beck and call would guarantee her a place in a coven after she graduates—and legendary treasure hoards are an added bonus—she thinks binding a dragon as her familiar will solve all her problems...

Because sometimes a girl needs a dragon, not a knight....
more
Amazon Other stores
Bookmark  Rate:

'Smoke and Mirrors' is tagged as:

Similar books to 'Smoke and Mirrors'

All books by Jess Haines  ❯

Buy 'Smoke and Mirrors' from the following stores: