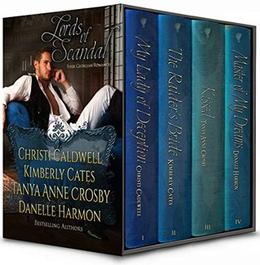 FOUR full-length Georgian novels from the stars of historical romance! You’ll be swept from the aristocracy of England to The Colonies on the eve of war and fall in love with four lords of scandal you won’t soon forget.

THE RAIDER’S BRIDE by Kimberly Cates
A masked patriot… By day, Ian Blackheath is the most sensual rogue in the colony of Virginia. At night, he secretly rides as Pendragon, ruthless leader of the patriot cause. The last thing he needs is a ward. What is a masked raider supposed to do when a pint-sized mistress of disaster is dumped on the doorstep of his mansion? Especially since little Lucy displays a penchant for unearthing secrets?

MY LADY OF DECEPTION by Christi Caldwell
For Georgina Wilcox, only child of the notorious traitor known as “The Fox”, there are too many secrets to count. However, after her interference results in great tragedy, she resolves to never help another... until she meets Adam Markham. Lord Adam Markham is captured by The Fox. Imprisoned, Adam loses everything he holds dear. As his days in captivity grow, he finds himself fascinated by the young maid, Georgina, who cares for him.

KISSED by Tanya Anne Crosby
England and Charleston, South Carolina, 1763 - Jessamine Stone vows to wed no man but her onetime fiancé, Christian Haukinge. She sets out to win back Christian’s affections, unaware that her brother has already offered him a bribe to break her heart. Christian agrees to the devil’s bargain, but soon finds Jessie’s innocent passion, trust, and faith undermine his resolve for vengeance.

MASTER OF MY DREAMS by Danelle Harmon
When nobly-born Captain Christian Lord is given command of the Royal Navy frigate HMS Bold Marauder, the never dreams that a crew on the brink of mutiny will be the least of his troubles as he heads to Boston to subdue pirates and rebels. Haunted by nightmares and a tragic past, Christian is loyal to King and Country . . . never imagining that his gravest danger could come in the form of a beautiful stowaway who secretly plots his destruction.
more
Amazon Other stores
Bookmark  Rate:

'Lords of Scandal: Four Full-length Georgian Romances' is tagged as:

All books by Christi Caldwell  ❯