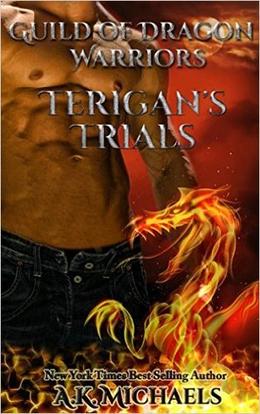 Jaxon, Master of the Guild of Dragon Warriors is puzzled when Zeeandra, the Dragon’s Goddess, orders him to send his best friend and most trusted warrior, Terigan, on a secret mission to Scotland – Scotland is, after all, Jaxon’s homeland. The Goddess will explain no further; but she sends Kuan, a Chinese God, to transport Terigan halfway around the world and both Dragons realize this mission is of vital importance.

And so it proves to be: Scotland’s resident Dragon Warrior reveals that a woman is being held captive by a pack of rogue Wolves. The stakes are enormous: Terigan must risk his life for the sake of a stranger, without even knowing why. But his Goddess and Master have placed their faith in him, and he won’t let them down.

Come and join Terigan in a mission that’s the most important of his long life: he just doesn’t know it yet.

“The second book in The Guild of Dragon Warriors series from New York Times Bestselling Author, A K Michaels, will enchant fans of paranormal suspense romance and keep them glued to their kindles; Ava has worked her magic once again!” Julia Hughes, Author.
more
Amazon Other stores
Bookmark Rate Book

Buy 'Guild of Dragon Warriors' from the following stores: