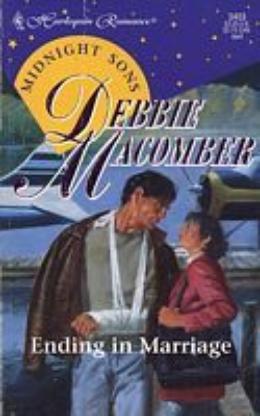 Location: 50 miles north of the Arctic Circle. Population: 150-mostly men-but growing! Because the O'Halloran brothers, who run a bush-plane service called Midnight Sons, are heading a campaign to bring women to Hard Luck.

Duke Porter. He's the best pilot Midnight Sons ever had. Tough, rugged, great in a crisis. He's also an unashamed traditionalist who delights in expressing outrageous opinions. Especially when Tracy Santiago's around... But Tracy gives as good as she gets, and their clashes become legendary in Hard Luck!

Tracy Santiago. The first time this Seattle attorney came to Alaska, it was on business-business concerning Midnight Sons. Now she comes because she likes the place, likes the people. Even Duke Porter... In fact, she more than likes him-and she can't understand why. He's so obviously not the kind of nice, sensitive man she wants. Or thinks she wants.
more
Amazon Other stores
Bookmark  Rate:

Similar books to 'Ending in Marriage'

All books by Debbie Macomber  ❯

Buy 'Ending in Marriage' from the following stores: