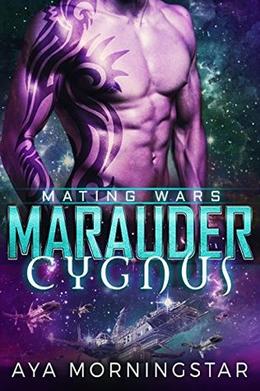 War rages between Earth and Mars, and an alien fleet from a distant star barrels toward our solar system. I’m laying low in the asteroid belt, as far from the war as I can get, but so is one of the aliens. And I’m the first to find him.

Second to find him? Pirates. A whole lot of them. The alien kills every last one to protect me, and we barely escape before reinforcements arrive. Now my life is in the hands of this savage, purple-skinned killer.

Not all of his skin is purple though, his...thing...is teal. And it’s nearly as big as the rest of him. His shoulders are as wide as Valles Marineris, and he’s tall as Olympus Mons. His ego is way too big for my tiny ship, but one look from him with that insufferable grin, and my cheeks burn hotter than Venus.

He’s protected me fiercely and without question, but which side will he take when the rest of his race comes to destroy us all?

Marauder Cygnus is the first book in the Mating Wars series, but it can also be read as a standalone. Each book in this rock-hard science fiction series has a happily ever after and NO CLIFFHANGERS.
more
Amazon Other stores
Bookmark  Rate:

'Marauder Cygnus' is tagged as:

All books by Aya Morningstar  ❯